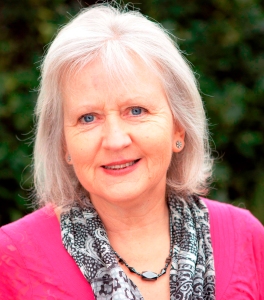 Wendy Ash plays the part of Miss Maple.  Here she tells us about herself.

I’ve been in approximately 40 ALP productions but my favourites were Dancing at Lughnasa and Snake in the Grass because the parts I had were real characters and very different from myself which made them that bit more challenging. I enjoyed taking theatre to a primarily non theatre going audience in local pub gardens where we were received with great enthusiasm. Maybe we made a few converts.

My other theatre interests include being part of Flatpacktheatre which enjoys doing plays of a slightly off beat nature such as Macbeth in a tent in Abbbots Langley park or gathering a dozen young people together to appear at the Edinburgh Fringe Festival or creating a tea room for 50 people in which to perform a docudrama about the Suffrage movement. The other string to my bow is working as a TV/film background artiste, where you can be working on a lavish BBC costume drama one day, and pushing a shopping trolley making a toothpaste ad the next. So if you see someone in Albert Square or in a bed at Holby, or loitering in a crowd behind Lewis who looks like me….then it probably is me!

(When written) the whole unlikeliness of the seemingly unobtrusive, all seeing, elderly lady, applying her everyday observations to crime solving, made for a wonderfully understated yet fascinating character, so when given the opportunity to play a Miss Marple type character, albeit in a spoof of the real thing, there could only be one answer. Yes please.

The challenges of this role are more physical than anything else. As soon as I open my mouth or react in anyway, I find myself adopting a mouse like, slightly stooping, enquiring stance which is playing havoc with my back. Apart from that she is a gem. I’ll straighten up eventually I’m sure. Got to suffer for your art, so they say.

My ultimate acting ambition is to do the best I can with whatever part I am currently playing.