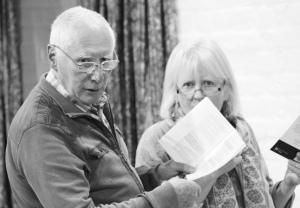 Brian Hibberd plays the hero of the play…well, perhaps more of a bumbling buffoon, the hapless Inspector Pratt.

This is what he says about his acting career…

I’ve acted in about 50 plays for ALP and directed 4, plus c. 10 for other companies.
Most challenging role – Billy (both as the abused boy and the abusing husband and father) in Five Kinds of Silence.
Most moving experience with ALP – directing Diane Samuels Kindertransport – including meeting a survivor.
What appeals about present character – contrast with previous role (Goche in The Herbal Bed) – I wanted people to leave Goche feeling disturbed and rather afraid; I want people to leave Pratt with indelible laughter lines!
The greatest challenge in the Pratt role – keeping my face straight and getting into the mind of a walking disaster who believes himself to be the greatest detective since Sherlock Holmes.
My ultimate acting ambition – a believable and powerful love story for an octogenarian!